So I’ve been thinking a lot lately about waiting and patience. Some of the time, or most of the time, I don’t think that I am actually aware that my thoughts are really centered on “waiting,” but they are. I’m just usually not waiting well.

Waiting is a discipline… because it is hard.

I have been in a season of beginning to open my eyes to the things that God is actually trying to do in my life, despite the stubborn fight that I put up against those things. In this eye-opening season, I have also been learning to wait. Perhaps much of my fight has been because I simply have not been willing or aware of the need to just sit and wait. My own actions in this remind me of my dogs and the way that the two of them wait differently.

I have two very different dogs though they look very much alike. One is an eight pound, two year old Yorkipoo whose curly black hair makes him seem several pounds larger than he actually is. He, Enzo, is one feisty firecracker that runs at the speed of light, turns on a dime, and leaps like a gazelle. The other dog is a forty-five pound, five month old Labradoodle that closely resembles a massively clumsy bear. He, Giovanni, often runs into walls, trips over himself, and slips on his own long curly black hair. They look very much alike, even though Enzo can actually fit underneath Giovanni, but their personalities are nothing alike. It does not take more than two minutes of observing them together to see how different they are, but my favorite display of their difference is when they are told to sit and wait. The small feisty pup, Enzo, quickly responds to his commands, but his waiting is impatient. His entire little body will wiggle and wiggle, mostly driven by the power of his nub-tail, and he struggles to contain his excitement of what follows the command to sit and wait. Giovanni simply sits. It is enough for him to simply please me by sitting. If something is to follow his command, he isn’t concerned about it but will gladly accept when it comes. He is patient, but even more importantly, he is patient because he was told to sit, and that is enough for him. While it is entertaining to watch  Enzo, I believe that Giovanni gets the real idea. My waiting tends to look more like Enzo’s.

I have learned something about my own self-discipline from my dogs. Both are rather smart breeds, so it was not a difficult task to teach them how to sit and then to teach them how to wait. During that process though, they both struggled very much in the beginning then slowly learned the benefits of obedience until eventually they knew that obedience must happen in order for the “reward” to happen. I have seen the discipline of waiting in them, but I have also learned about the struggle in not waiting well.

This is how Giovanni waits. He is still. He knows that I am in control, and he knows that I will not act until I am ready. There is nothing he can do, no begging, no wiggling, no encouraging, to make me act more quickly than I choose to. When I take them out in the yard to play fetch, Enzo instantly becomes anxious, antsy, and annoyed. He knows that the ball in my hand will soon be thrown and that he will be able to run and chase it down, but he also knows that he must first sit and wait until I give the command to go or throw the ball. He makes these strangely muffled grunts and whines because the frustration and angst inside of him is too much for him to handle. I usually cannot resist from laughing at him, and I occasionally make him wait longer just so that he remembers who is in control of the situation.

Sometimes I wonder if God, too, is chuckling as He observes the built up angst that knots my insides as I wait for Him. I might be waiting… but am I waiting well? Is the best way for me to wait similar to that of Enzo? Or do I need to take a few pointers from Giovanni? There is something about the way that Giovanni looks up at me in his waiting that is restful. His calming, still nature reminds me of Psalm 46. Just be still. And wait. Knowing that He is God. It should be enough for me to know that in my waiting, He is God. He is God, and I am not. I know not what tomorrow brings or how today will end. He knows each and every aspect of my every second left on this earth. What about that fact should cause me to tense with anxiety and worry and wondering? Nothing.

It is enough to be still and know that He is God.

I do not think every part of Enzo’s shaky little wait is bad. There is a large part of him that is genuinely ecstatic at thought of fetching the ball. Not every part of his whine-grunts stem from impatience; some of it is because he is simply excited. Excitement is good. Expectancy honors the character of the God who provides.

If I could learn to be still in my waiting, and yet be strong and encouraged by the expectancy of what God will do, I think I may be learning how to wait well. In the small moments which my dogs wait for me to act next, their eyes remain on me. In the waiting, there is connection. In my waiting, God’s eyes are NEVER NOT on me. Just as my pups watch me expectantly, so, too, should my eyes be fixed on the author and perfecter of my faith, as I wait, in faith, for what is to come next. If my gaze is set on Him and the things that are above, I won’t miss the connection and intimacy that takes place in my waiting. There, instead of angst and nerves, is peace, assurance, and comfort. I am reminded of Kristene DiMarco’s “Take Courage”:

Hold onto your hope

As your triumph unfolds

For your enjoyment….. the boys: 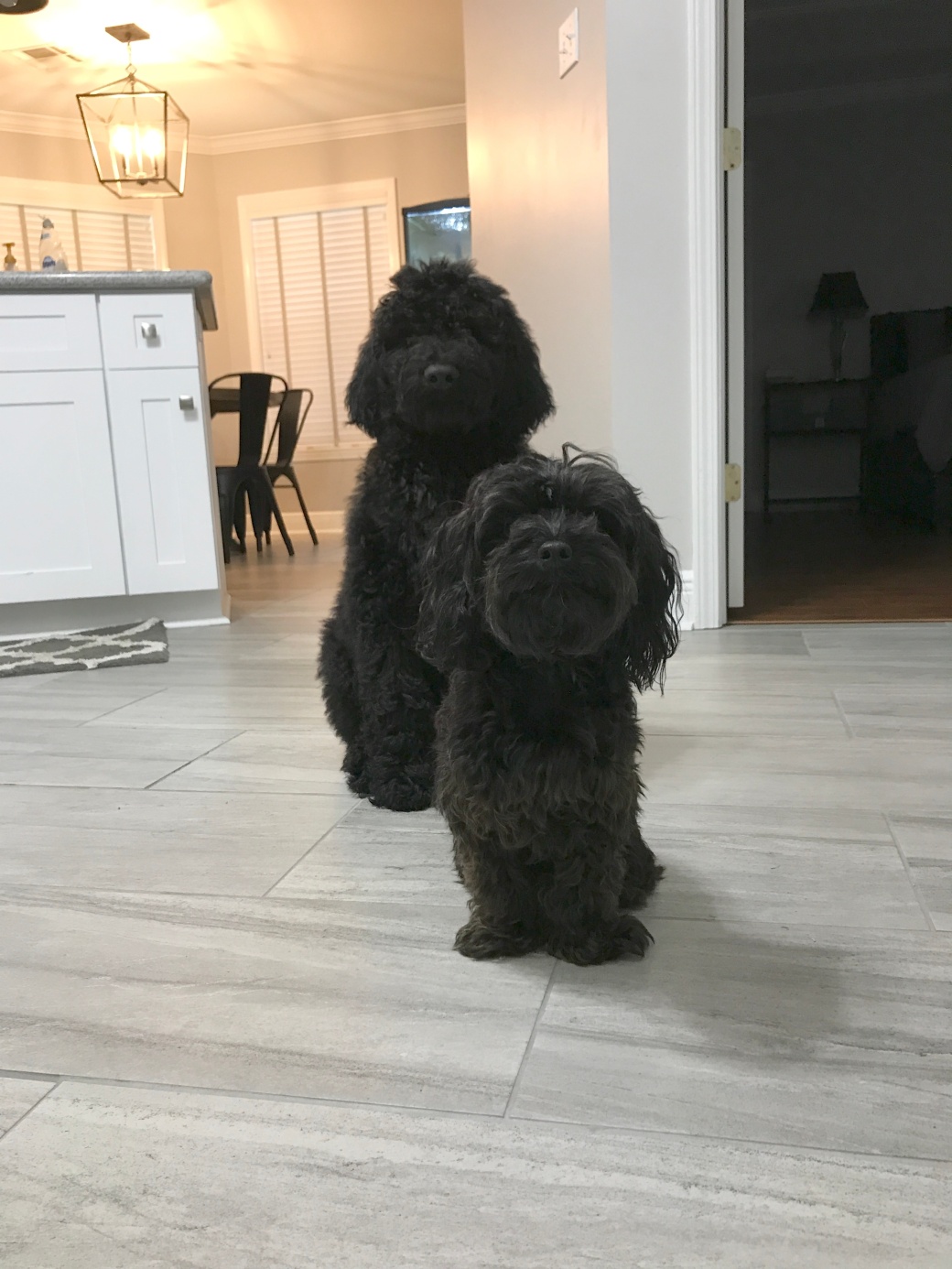 2 thoughts on “In the waiting”